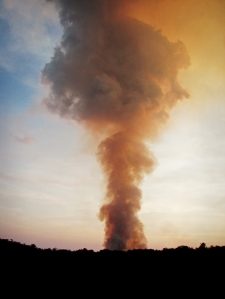 MJ crept closer and closer. Bent double each step a study in silence. Nerves tingling with excitement awe and a tinge of fear he paused to quieten his breathing, a difficult battle against the energy pulsating inside. An unexpected sound made him duck and dodge around the corner. There it was. So close, and yet he could not go much further without being in fear of his life, literally.

MJ knew, just as certainly as he knew he was an Israelite, that it was the Holiness of the place that drew him. He would not admit that to a living soul, but there was something special, alluring, seductive about this place that called to the deepest part of his soul, creating an ache that could only be filled by being here, close. Another step forward and his heart thumped in response to being this close.

He would pay a price for this. That was for certain. Berated and punishment awaited him at home the moment his mother caught him. But even as his mother scolded MJ knew that as he looked into the eyes of his father, Michael Senior, he would see that this man knew the joy of just being near the Tabernacle and the Pillar of Cloud and the Pillar of Fire. As usual his Papa would let his mother rebuke him for a while and then he would softly but firmly interrupt and remind her that “A ten year old boy has to do what a ten year old boy has to do.”

As he crouched in the shadows of a Levite tent, MJ watched the Cloud. It shone and shimmered and hovered over the Tabernacle. Awed by it he felt its presence wash softly over him and fill him with a gentle peaceful joy. He smiled and would have laughed except that would mean capture by an irate Levite adult. He came here often, mostly for that wonderful feeling of love and acceptance he got whenever he was in touching distance of the Cloud. Well, maybe not touching distance. He may have been a tiny lad when he saw those who got too close to God consumed by fire but he knew he was not going to join them.

Time stood still, yet passed swiftly at the same time as he just sat and watched the Cloud. From this perch he could see in the Levites coming and going from the Tabernacle. Some carrying ashes and burnt offerings, some escorting people out of the camp, some just seemed to be busy bustling back and forth.

And as he watched and waited quietly he felt the change a moment before he saw it. The very atmosphere, the Cloud seemed to inhale deeply and then it slowly started to lift up from above the Tabernacle. MJ smiled again. It was time to move!

Quickly, quietly he raced for home! He wanted to beat the sounding of the trumpets. To tell his mother that it was time to pack before the trumpets sounded would save him a lecture for sure.

The excitement, the adventure, was what this young boy’s heart longed for. And having a God he could trust in and who did so many, many miracles for them, from manna each day to escaping Egypt, was what life was all about. MJ knew that one day God would lead them into The Promised Land and the joy of that was an exciting bubble ready to burst that constantly bounced inside. MJ was ready for whatever God brought his way. But for now it was time to pack everything up and be ready to move as soon as the trumpet sounded.

Do you agree? Add your thoughts to the discussion. Cancel reply